Stephen Jackson, solicitor and principal at Jackson Osborne represented the claimant in obtaining a Tribunal award of nearly £400,000, Wales’ highest ever discrimination award, and believed to be the third highest disability discrimination award in UK history. 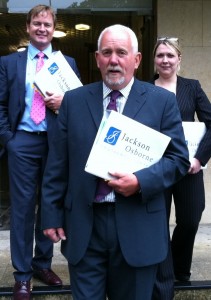 Mr Jonathan Jones was branch manager for Jewson Ltd in Cardigan, West Wales. When in April 2009 he suffered a severe stroke, Mr Jones had been averaging over 60 hours working time per week, was not taking his full entitlement of holidays and was consistently carrying over a considerable proportion of untaken holiday each year.

However, Mr Jones had signed a 48 hour opt out agreement and there was a clear expectation that branch managers would work far in excess of their contracted hours. After the stroke, Mr Jones’ doctor reported that Mr Jones needed to avoid stress as work and Mr Jones accepted that any role was going to be stressful. His area director, a colleague and friend over many years, agreed and in conjunction with HR decided that no role was going to be without stress. As a result, after 5 months sick leave, Jewson dismissed Mr Jones on grounds of incapacity.

Mr Jones was age 55 when he suffered the stroke.  He had been in the industry most of his working life and had been employed by Jewson for 22 years.
Jewson Ltd is part of the global business of Saint Gobain which has turnover of £20 billion, employing 140,000.  Jewson itself is a nationwide business with a staff of over 10,000 and its HR department is that at Saint Gobain’s UK head office.

At a liability hearing in August 2010, the Tribunal in Cardiff found the dismissal was unfair and amounted to disability discrimination by reason of failure to make reasonable adjustments.

Prior to the remedies hearing, Jewson’s calculation of the award due stood at approximately £56,000.  At the remedies hearing on 06 July 2011, the Employment Tribunal ordered Jewson Ltd to pay Mr Jones £390,870.58 including £15,000 injury to feelings and an uplift of approximately £18,000, effectively as a penalty for unreasonable failure to follow the ACAS Code of Practice on disciplinary and dismissal procedures.

What went wrong for the employer

There is insufficient space in this article to set out all of the difficulties that Jewson created for itself. However, the two most obvious points are these.

Firstly, Jewson was complacent in accepting that its existing working practices of long hours were necessary. This was no doubt the view of its area director Mr Jones seemed to agree with him. However, the Tribunal accepted the argument put on behalf of Mr Jones that there was insufficient evidence to support that view. Mr Jones’ opinion didn’t count for much on the point either. The Tribunal could therefore find that some reallocation of duties and additional managerial support could have created a less stressful environment.

Secondly, if a less stressful working environment could be created, then it would also have been reasonable to allow Mr Jones more time to recover his good health so that he could return to it. Although during the 5 months absence Mr Jones’ recovery was slow and prospects appeared poor, he in fact made a complete recovery within 11 months of the stroke. (It is interesting to note that, if Jewson had waited, Mr Jones would not even have come within the definition of disability which is necessary for his discrimination claim.)

Lessons to be learned

Jewson assumed that Mr Jones’ condition was so severe that his health was at risk if he returned to work in any role.  Jewson assumed its working practices were necessary for an efficient business.  The golden rule is: never assume.  It is nearly always worthwhile to take time to challenge your assumptions, to look at matters from a different perspective.  Given the complications of employment law, it will often be worthwhile to invest in taking that perspective from a specialist employment lawyer.

On a more specific point, recognise you may be acting unfairly, and discriminating unlawfully, if you don’t obtain specialist and up to date medical evidence. That is nearly always going to be essential to keeping you on track in any incapability procedure.

This case entered unchartered territory of including a claim for loss of career 10 years into the future past the age of 65. The Employment Tribunal held that, despite the removal of the default retirement age of 65, Mr Jones would have retired at age 65. The Tribunal has yet to give its reasons, but fortunately for Jewson Ltd, that was the Tribunal’s view of the evidence.

The decision could have been very different. If an employee thinks there is a 50/50 chance that he would continue working past 65, to age 70 say, should there be some compensation for a period past 65? There may be very little evidence to help a Tribunal speculate on an employee’s attitude to work 10 years into the future. Is it unfair against an employer to assume work would continue? Or would it be discriminatory for the Tribunal to assume an employee would stop work at 65, or 67, or 70 or for that matter at 80? These are unanswered questions likely which are relevant not only to Mr Jones’ case, but potentially to dismissal of any employee approaching retirement (at whatever age that may be).